FREE POLES WITH EVERY NEW SKI ORDER! While suppplies last... 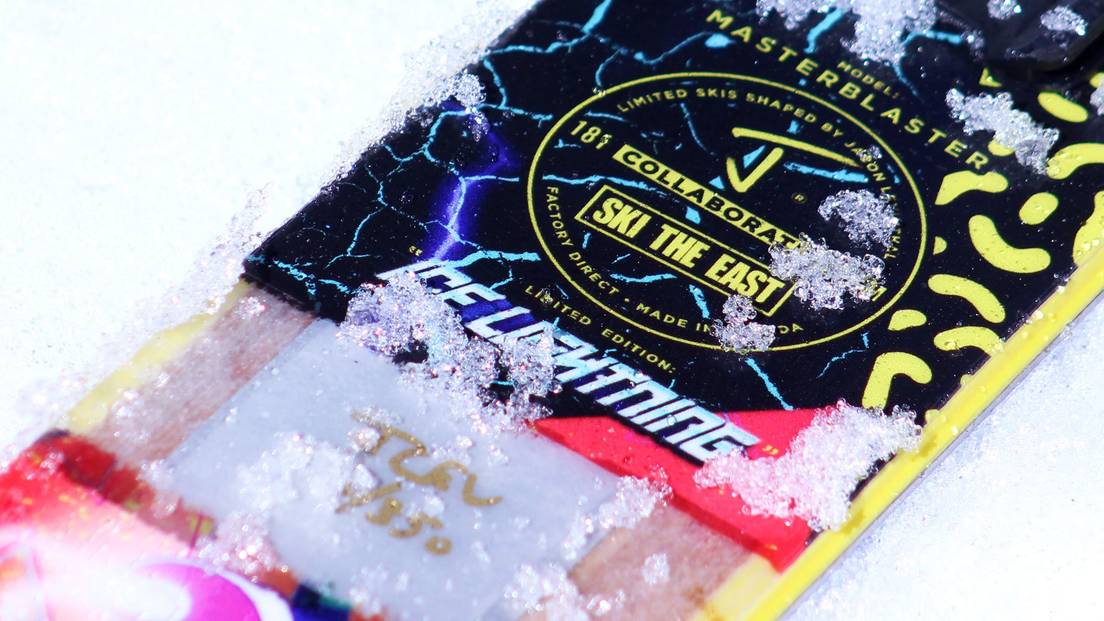 First off, there are only 450 pair made... and we've got A TON of east coast fans, so heads up, they're gonna sell out fast! If you’re stoke meter is pinging, then snag yours today before the Ice Lightning melts away.

Ski The East was created by 2 ice coast madmen Chris James and Geoff McDonald back in 2005 here in Burlington VT. I first met them while they were pretending to attend college... AKA driving all over the northeast and Canada making ski movies with their friends. They grew their annual films into the undisputed biggest eastern movie tour of the times promoting ice coast skiing madness like no one else could under the name "Meathead Films." Their movies defined and brought pride to the region like never before!

Eventually they realized they had to also make a living, and launched the "Ski The East" brand. Over 15 years later they now design all kinds of badass apparel and accessories, media, and events that promote eastern skiing with the attitude we all share. They give back even more by being a member of 1% for the Planet, producing clothing through Fair Trade Certified factories, and partnering with 2 awesome non-profits with VT roots: High Fives Foundation and Flyin Ryan Hawks Foundation. All in the name of keeping the shred alive!

I've created a lot of crazy graphics over the years but this one may be the winner! What do you get when you mix a snow leopard, bulletproof hardpack, 80's video game graphics, thunderbolts, and the Meathead mascot? "ICE LIGHTNING" of course!!! AKA one of the nuttiest graphics, and dopest collabs we've ever created to Keep The Shred Alive with our good friends at Ski The East!!!

Remember there are only 450 pair made... and we've got A TON of east coast fans, so they're gonna sell out fast. If you're born from ice... pull the trigger now!!!

The mid-width ski in our Charge Collection for great firm snow performance with added float in fresh powder.

We redesigned our #1 selling all-mountain ski ”The Masterblaster'' with a new, wider 99mm waist and slightly increased rocker. The result nails the sweet spot of freeride performance by enhancing soft snow playfulness, while providing firm snow precision and responsiveness for ripping everything on the mountain without compromise. Our proven light titanal-laminate construction enables power and stability where you need it, while keeping swing-weight low and maneuverability high. This new ski has the same rebellious frontside attitude you’ve come to expect from “The Masterblaster,” now with a bigger sweet spot that begs to take the road less traveled!

The Masterblaster In The Wild Highest quality wood for a lively energetic feel & long life
The factory is located in Quebec Canada, so we got Maple, eh! Maple is a very expensive high quality hard wood, thus the reason it’s used to build floors and furniture in your house that lasts a lifetime. Maple absorbs impact, and has a ton of energy for a very ski feel and long life. We run 4 – 20mm wide Maple laminates the entire length of the core, plus 100% under your foot for unprecedented energy, durability & binding screw retention. At the tips of my skis you’ll see more of the light colored Aspen which is incredibly lightweight with plenty strong when laminated alongside Maple for reduced swing weight at the tips.